About our Son, Eric Brandon Wynns 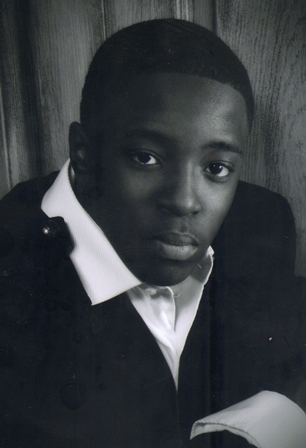 Energetic, Chatty, Social Butterfly, Independent, Determined, Caring are all characteristics that describe our Son, Eric Brandon. Otherwise known as “Lil E”, he was born June 1, 1991. And as we all know, Geminis have a tendency to think and be different from one day to another. What stood out most about our Son was his drive to overcome obstacles and to finish what he started no matter how long it took. As Eric became older, he started thinking about what he wanted out of life and put a plan in place to make it happen. He set a goal to become a member of the Kappa Alpha Psi Fraternity and to graduate from college.

As a child, and even through his young adult years, Eric had to work much harder than the other young men. He refused to let his outside appearance dictate what he knew in his heart could be done if he believed in it. Eric always wanted to play against the bigger kids to show that he was just as good, if not better, than they were in any sport. Coaches would always tell my husband, “Man your Son is a quick study, understands the game, and is fast. Once he gets bigger he will be unstoppable”. I think after hearing that type of feedback so many times over the years Eric simply understood that he just needed to give 120% every time he stepped out on the field or court and let his talent and determination speak for itself. Our Son was not the one to be pinned down by anyone because of his temperament or height. Eric became a part of the Rising Stars Recruiting and Academy Training program when it commenced in 2008.

Eric was a junior wide receiver at SVSU and majored in Social Work, where he would have been graduating December 2015 with his BSA in Social Work. In the midst of fulfilling his goals, Eric “SHOWKACE” Wynns crossed the “burning sands” into Kappa Alpha Psi Fraternity Inc., Spring 2014 Xi Iota Chapter.

Eric grew up surrounded by family and friends and loved being the life of the party. He left a lasting impression on everyone with whom he came into contact by making them laugh, presenting a challenge, or just being there to listen and to give advice, whether it was wanted or not. Eric was the type of person who would allow you to stay at his place until you were able to get back on your feet. Our Son handed out what he did not have or could not afford to give away. I remember asking him one time, “How are you going to feed and take care of the next person when you’re barely feeding and taking care of yourself while in school.” He would simply respond, “Mom I got this, I can’t let my friends sleep in their car.” I realized then that he was just emulating what he had seen his family do as he grew up, being there for someone in time of need.

On August 10, 2015, my world became dark as my husband and I had to sit down in front of a surgeon and hear the words that no parent should ever have to hear, “Your Son was involved in a car accident and he did not make it.” I immediately cried out, “No, not Eric!!”. I remember thinking to myself: “He’s faced challenges before and made it work; he’s not gone.” It wasn’t until I felt the social worker’s hand and her head pressed against my shoulder trying to comfort my husband and me, that I realized my nightmare was a reality. I said to my husband, “Our Son is no longer here with us, what are we going to do now?”

Fast forward to the day of his funeral service. As our family entered the sanctuary and service began I noticed young men and women with whom Eric developed longtime friendship over the years through school and sports. As we listened to remarks, everyone commented that Eric made a huge impact on their life because of the way he lived his life…Energetic, Chatty, Independent, Determined, a Social Butterfly, and Caring.

There is not one hour of the day that goes by that I don’t think about my son and wish he was still physically here with us. He is now our assigned Angel.

It is through prayer and faith that we’re now able to turn our loss into a blessing for the next student athlete. A young man or woman who has a plan to accomplish goals no matter how long it takes as long as he or she believes in it. This was Eric’s dream and now it is ours.

Eric’s favorite Bible Verse:
“Truly I tell you, if anyone says to this mountain, ‘Go, throw yourself into the sea,’ and does not doubt in their heart but believes that what they say will happen, it will be done for them.  Therefore I tell you, whatever you ask for in prayer, believe that you have received it, and it will be yours.